As part of its partnerships with post-secondary campuses in the Midwest, Lost&Found is using an evaluation tool called the Campus Resilience Index (CRI) to provide guidance on how to best create a culture of suicide prevention.

The tool was piloted at Lake Area Technical College in Watertown, S.D., in the fall of 2021.

“This is exactly what I wanted – what I needed,” LATC counselor Jessi Whetsel said after the process was completed. It helped to confirm what she had observed about the campus culture at Lake Area Tech and provided a better idea of how to fulfil student needs.

Lost&Found’s Research & Evaluation Manager Gesine Ziebarth, who helped to design and implement the CRI, said the pilot project at Lake Area “opened up the discussion for where we can go from here as an organization and how a tool like the CRI support students.”

The CRI is based on the Center for Disease Control and Prevention (CDC)’s technical package on suicide prevention (Preventing Suicide: A Technical Package of Policy, Programs, and Practices (cdc.gov)). Lost&Found staff defined indicators of risk factors and protective factors of suicide on college campuses that aligned with the CDC’s seven strategies of suicide prevention. Lost&Found looks at the overall campus mental health ecosystem — including policies and procedures, reporting structures, accessibility of information, resources listed on websites, syllabi, student clubs and organizations, and more — to identify strengths and gaps in suicide prevention practices.

This assessment provides campus administrators with information that helps them create an environment conducive to wellness on campus.

Evaluating a campus using the CRI begins with gathering data. Education & Advocacy Manager Courtney Young gathers preliminary data using the school website and conducts interviews with staff to determine structures of support currently in place on campus. Research & Evaluation Manager Gesine Ziebarth determines how the data aligns with each of the indicators defined in the index.

Once measurements of resilience are determined, they are sent to a campus partner with a request for feedback. After that feedback is incorporated, Lost&Found present the CRI and the recommendations they have identified to campus staff, including campus counselors and administrators.

The CRI is intended to be implemented annually so administrators can see how the campus culture changes over time, either through their efforts to improve it, from outside factors, or both.

Since the successful pilot program at Lake Area Tech, Lost&Found has started the process of implementing the CRI at Dakota Wesleyan University and will present recommendations for improvement in July. The goal at Dakota Wesleyan is to increase retention and a sense of belonging on campus primarily using two of the seven strategies outlined in the CDC’s technical package — identifying and supporting people at risk and promoting connectedness — as these have been identified as areas of growth at DWU.

Lost&Found has also started the CRI data collection process at the University of South Dakota and hopes to use the Campus Resilience Index at South Dakota State University, Augustana University, and Western Dakota Technical College in the near future.

We are halfway through June, and Lost&Found (along with many others) is celebrating LGBTQIA2S+ Pride Month. What is it, and why does it matter to Lost&Found? Read on!

What is Pride Month?

Pride Month honors the struggle for recognition and equal rights by those in the LGBTQIA2S+ community. Originally focused on gay rights, Pride Month now covers a broader spectrum. The acronym stands for Lesbian, Gay, Bisexual, Transgender, Questioning (or Queer), Intersex, Asexual, Two-Spirit, and Other Identities (+).

It’s also a time for celebrating the accomplishments of LGBTQIA2S+ people, as well as a time for people to gather and find encouragement and community together.

Pride Month is celebrated in June because that’s when the Stonewall riots, an important event in the history of gay rights, took place in 1969. In the 1960s, when homosexual acts were illegal and homosexuals were often publicly shunned and the target of violence, police frequently raided gay bars, arresting the customers. On June 28, 1969, when police raided the Stonewall Inn in Greenwich Village in New York City, patrons refused to cooperate and fought back. The riots that night and in the nights following led to a sea change: People who had hidden who they were before were empowered to be open about who they were, and the cause of gay rights gained strength throughout the nation and the world.

The use of the word “pride” to describe celebrations of LGBTQIA2S+ was encouraged by a gay activist named L. Craig Schoonmaker. “A lot of people were very repressed. They were conflicted internally, and didn’t know how to come out and be proud,” Schoonmaker said in an interview with The Allusionist podcast in 2015. “That’s how the movement was most useful, because they thought, ‘Maybe I should be proud.’”

Why is Lost&Found celebrating Pride Month? 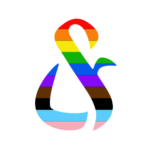 Unfortunately, there is a connection between suicide risk and LGBTQIA2S+ young people.

The Trevor Project’s 2022 National Survey on LGBTQ Youth Mental Health shows that rates of suicidal thoughts have increased among LGBTQ youth in the past three years. Among the key findings:

While rates among the general young adult population have also trended higher recently, the risk is significantly higher among the LGBTQ population. For example, a Centers for Disease Control and Prevention survey conducted in 2020, in the height of Covid-19 pandemic restrictions, found that 25 percent of young adults (ages 18-24) had considered suicide. (This is, of course, also unacceptably high.)

“Our efforts to prevent suicide among youth and young adults cannot be taken seriously if we do not live out our work as allies to the LGBTQ+ and Two-Spirit communities of South Dakota and the surrounding region,” said Lost&Found Executive Director Erik Muckey. “We have a responsibility to understand and respond to the roots of suicide risk for LGBTQ+ and Two-Spirit South Dakotans. I strongly encourage all South Dakotans, especially community leaders, around our state and region to join Lost&Found in celebrating Pride Month while recognizing our collective role in preventing suicide.”

What’s the cause of suicide risk among LGBTQ young adults?

Some have suggested that increased suicide risk is a result of being lesbian, gay, bisexual, transexual, or queer, but the results of the Trevor Project survey suggest that is not the case: “LGBTQ youth are not inherently prone to suicide risk because of their sexual orientation or gender identity but rather placed at higher risk because of how they are mistreated and stigmatized in society,” according to the survey. This is backed up by survey findings:

How can we help?

The list above suggests some clear “dos and don’ts” for our society: Obviously, don’t physically threaten or harm LGBTQIA2S+ people. Don’t discriminate against them. Don’t try to convert them.

DO accept and support LGBTQIA2S+ young adults. According to Amit Paley (he/him), CEO & Executive Director of The Trevor Project: “The fact that very simple things — like support from family and friends, seeing LGBTQ representation in media, and having your gender expression and pronouns respected — can have such a positive impact on the mental health of an LGBTQ young person is inspiring, and it should command more attention in conversations around suicide prevention and public debates around LGBTQ inclusion.”

Lost&Found will be at Sioux Falls Pride events on Saturday, June 18. 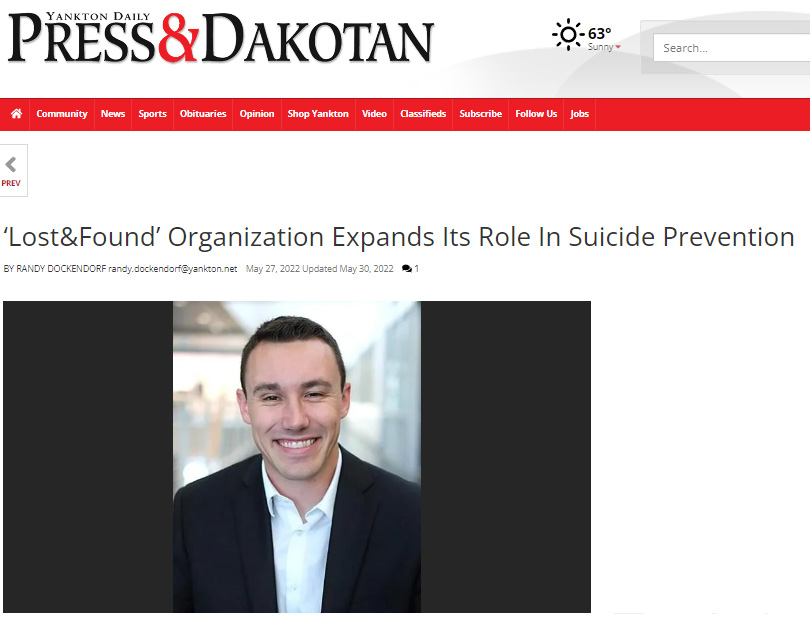 The Yankton Daily Press & Dakotan featured Lost&Found’s work as part of a series for Mental Health Awareness Month. Here’s a segment from the story:

Muckey serves as executive director of Lost&Found. The non-profit organization has grown far beyond its start at USD and South Dakota State University in Brookings.

“We serve 13 post-secondary institutions from the Twin Cities to the Wyoming border,” he said. “We have expanded our services a great deal, especially during the pandemic.”

The organization’s footprint isn’t the only thing that has grown since its 2010 founding, Muckey said. He pointed to the successes of addressing what was an often unknown or taboo subject.

“I think the greatest change that has happened over the past 12 years is awareness of the need to invest in mental health. There is an increased realization that it’s a good thing (to address it),” he said.

You can read the rest of the story here.