Data gathered at the end of the spring 2022 semester show that students said they gained skills and were satisfied with Lost&Found’s Peer2Peer and Advocates programs.

“All the great feedback we got about the session topics was wonderful,” said Melissa Renes, Senior Prevention Specialist, who coordinates the Advocates program. “It was reassuring to hear that we were fulfilling the expectations students had and they were learning more than when they started.”

One of the positive outcomes Renes noted was the creation of a safe space to discuss difficult topics.

“Talking about mental health can be difficult, especially to ask questions that may have been stifled in the past,” she said. “Students are eager and wanting to discuss these topics, so creating the safe space for students to talk openly about their questions and concerns, and to learn knowledge, was important, and we achieved that.” 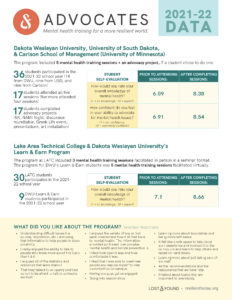 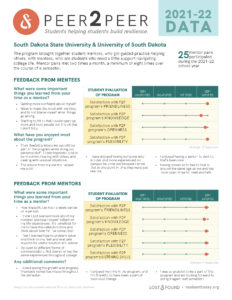 Renes hopes these programs can be expanded to other campuses, and that more students will sign up on both current and new campuses. “We have some great Advocates who are educating their fellow students about how great the program is, so using their testimonial is better than any pamphlet.”

See the data below, or click on the images at right to open downloadable PDFs.

The program brought together student mentors, who got guided practice helping others, with mentees, who are students who need a little support navigating college life. Mentor pairs met two times a month, a minimum of eight times over the course of a semester.

What were some important things you learned from your time as a mentee? (selected responses)

What have you enjoyed most about the program? (selected responses) 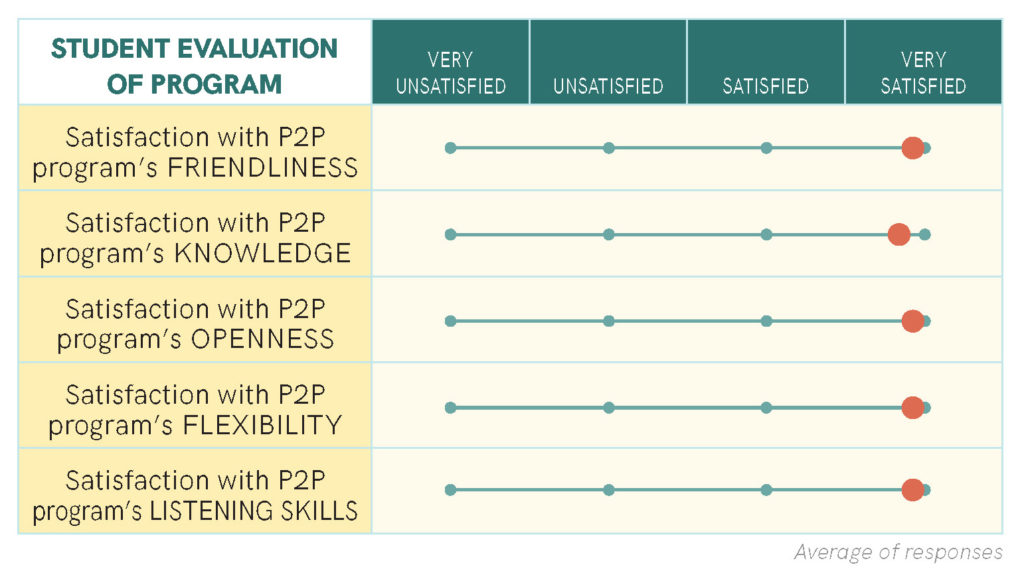 What were some important things you learned from your time as a mentor? (selected responses)

The program included 5 mental health training sessions + an advocacy project, if a student chose to do one.

What did you like about the program? (selected responses)

A new opportunity for students to help other students began at South Dakota State University this spring with a pilot project of Lost&Found’s new peer mentorship program.

The program matches mentors, who are often students interested in going into helping professions, with students who need a little extra support, according to Susan Kroger, Director of Programs at Lost&Found. “(It) allows them to build a relationship, hopefully resulting in both students feeling more resilient and having increased skills as they move forward in their college careers.”

Developing this program has been discussed at Lost&Found for almost four years as a way to address an increasing need for student support. Counseling centers at SDSU and other universities are feeling overburdened, Kroger said. “We’re hoping that this a way that students can be connected to both skills and resources before they seek out counseling.”

Kroger and Carrie Jorgensen, a campus counselor and a Lost&Found adviser at SDSU, worked together over the winter to develop the programming, and the pilot project launched April 1.

The mentor and the mentee met once a week. At the beginning of their meetings, the two worked together to set goals of what the mentee wants to work on. “So, for instance, the mentee could said say, ‘I want to work on exercising three times a week.’ And then the mentor’s role would be to encourage and to check in with the mentee to help them reach that goal—all in the service of increasing mental health,” Kroger said. Other goals could include encouraging a student to connect with others through clubs or seeking out a support group for extra assistance.

At the start of the program, mentors go through a two-hour training that includes relationship basics such as active listening.

Mentors also complete QPR (Question, Persuade, Refer) suicide prevention training and receive instruction on setting boundaries so that mentors themselves don’t start to feel overburdened. A graduate assistant at SDSU checks in with mentors regularly to ensure that mentors’ needs are being met.

The pilot project, which lasted about a month, included just a small group of mentors, but it did include a mixture of students—SDSU Lost&Found chapter members, an individual from ROTC, and psychology and counseling majors. Mentees were typically younger students identified by residence hall assistants as needing a little extra support.

The mentees said they enjoyed having someone to talk to and knowing that someone was available to answer their questions and look out for them.

Faculty members were also pleased with the student response. “(They are) really hopeful for being able to scale up this program pretty significantly in the future,” Kroger said.

The full-scale version of the peer mentoring program is planned to start at SDSU in the fall, and other S.D. universities are considering whether to launch their own programs as well.