Dennis John “DJ” Crawley-Smith, who as a high school student was the visionary who developed the ideas and creation of Lost&Found and who led the organization in its early years, died of brain cancer Monday, March 21, at his home in Seattle. He was 30 years old.

“For more than 15 years, I’ve called DJ a friend and partner in this work, and the news of his passing is heartbreaking for me, personally, and our team at Lost&Found,” said Lost&Found Co-Founder and Executive Director Erik Muckey. “Our thoughts and prayers are with his husband, Ben, and his parents, siblings, family, and countless friends throughout the world. DJ has touched many lives and will continue to touch lives well beyond his time here with us.”

Crawley-Smith grew up in Mitchell, South Dakota, and graduated from Mitchell High School in 2010. His work that became Lost&Found started in 2008 as an informal Facebook network with a wish to “do more” to prevent suicide. In a year, that Facebook group grew to more than 3,600 members.

Crawley-Smith wrote about this work in 2020: “(T)he school project that becomes Lost&Found focused heavily on making sure people didn’t feel alone. I would make weekly and monthly tasks for thousands of members to complete. We would litter the high school with sticky notes to brighten our peers’ days, write letters to our mentors and friends to show they matter, you get the idea. At the heart of this project was that we as a community can be better to our neighbors and friends to prevent mental health issues all while attempting to reduce the stigma surrounding it.” 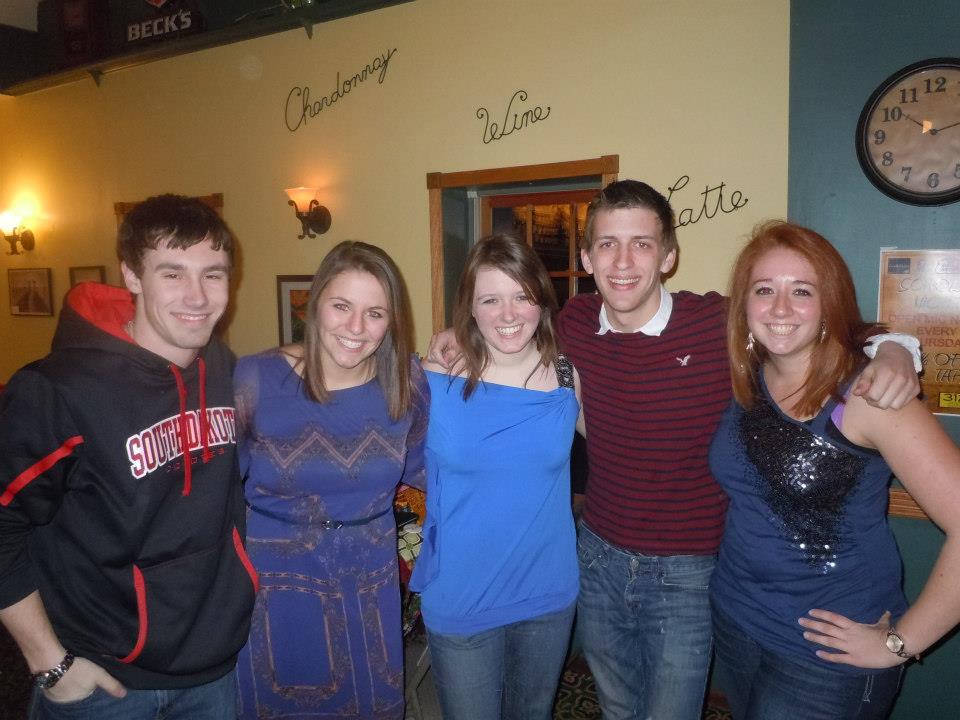 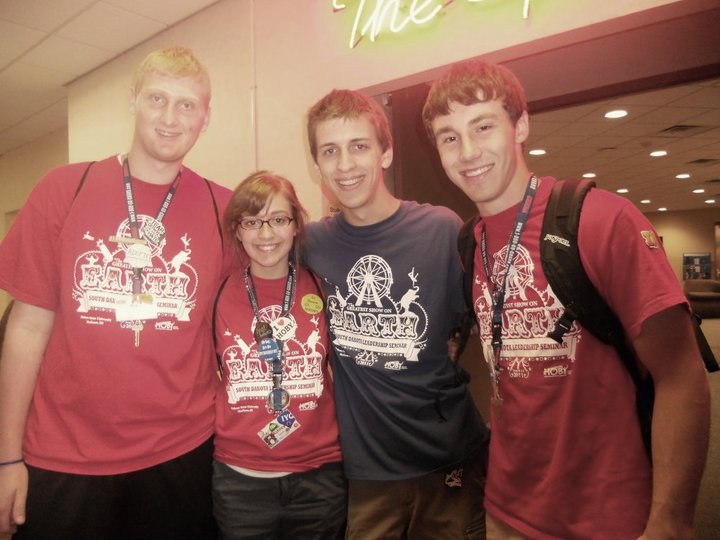 DJ Crawley-Smith posing with volunteer staff from HOBY South Dakota after speaking at a panel in 2012. 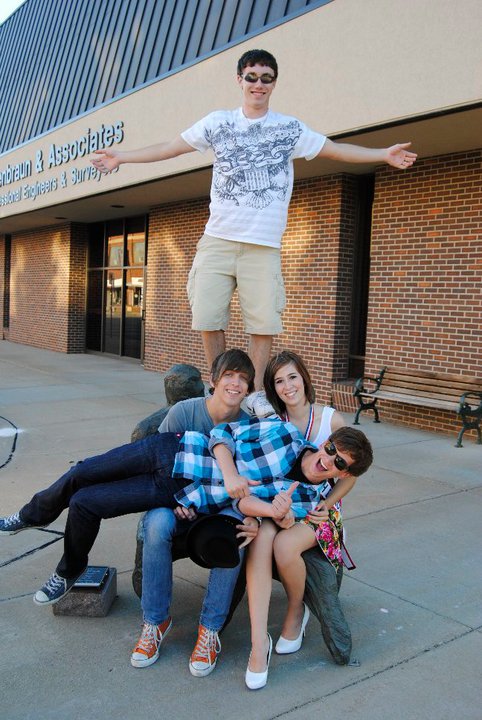 Four of Lost&Found's founding board members pose for a candid in Yankton, SD (2014).16-year-olds Dennis “DJ” Smith of Mitchell, South Dakota, and Kayla Roszkowski of Dearborn, Michigan, create a Facebook group titled “Doing more than writing ‘Love’ on my arm” to organize friends and peers to actively help people struggling with depression or suicide ideation. 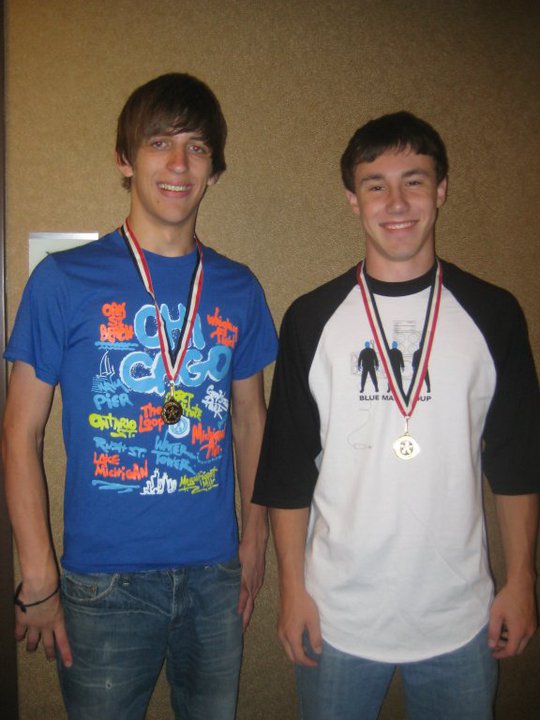 DJ Crawley-Smith and Erik Muckey at the 2010 National FCCLA Conference in Chicago, IL. 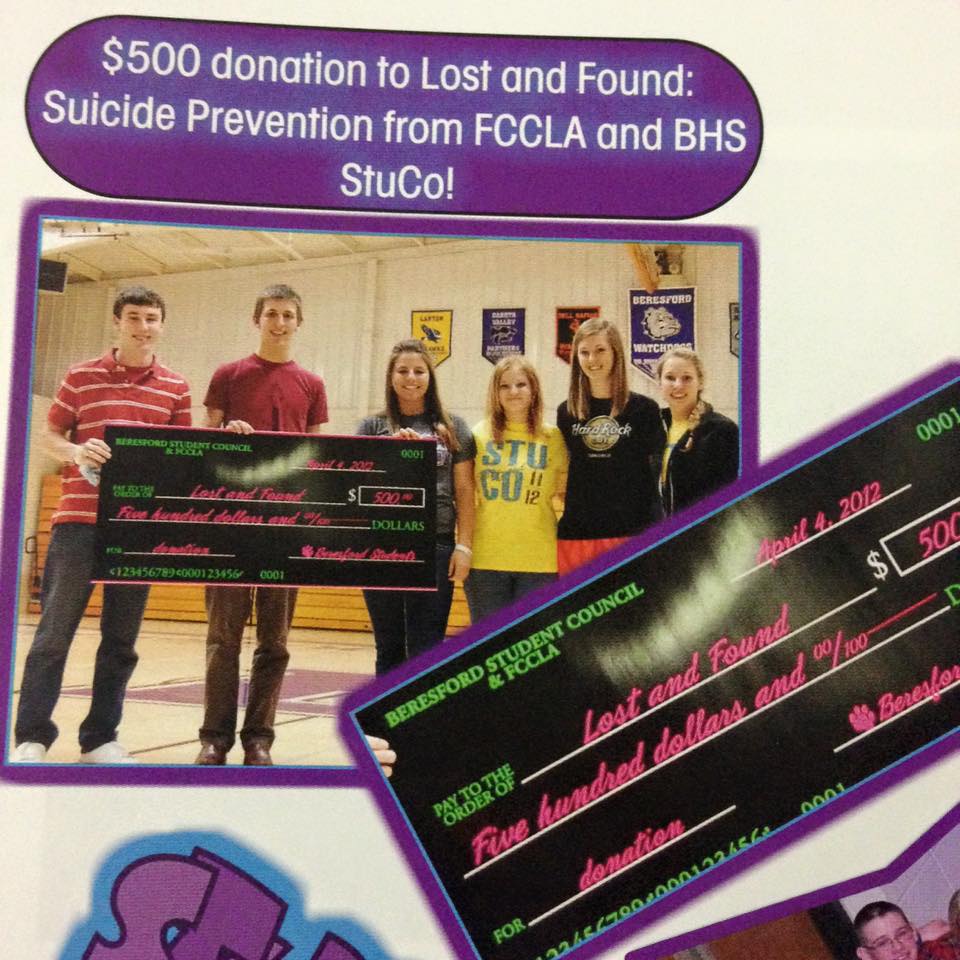 DJ Crawley-Smith poses with Erik Muckey and members of the Beresford HS Student Council and FCCLA chapter in 2012.DJ Smith engages Facebook group in organized “random acts of kindness” work and presents results at Family, Career, and Community Leaders of America (FCCLA) national conference in Chicago. On the way home, DJ assembles a group of high school students to form a South Dakota nonprofit organization with the legal name “The Lost and Found Association.” 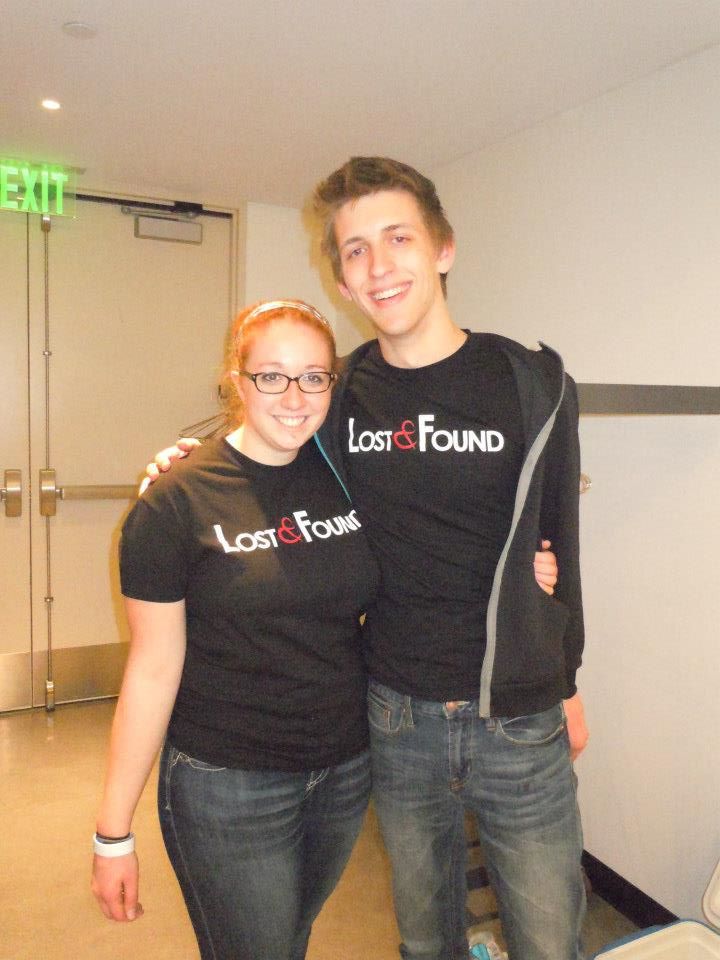 USD Chapter President and Lost&Found Board Member poses with DJ Crawley-Smith at the annual "Battle of the Bands" charity concert in Vermillion, SD (2013). 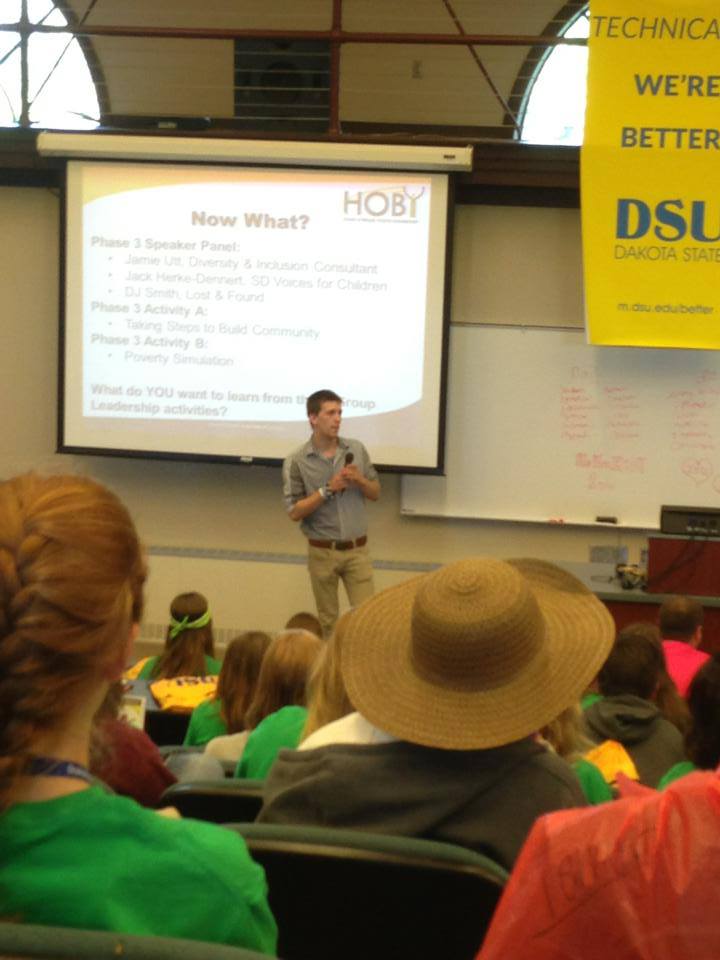 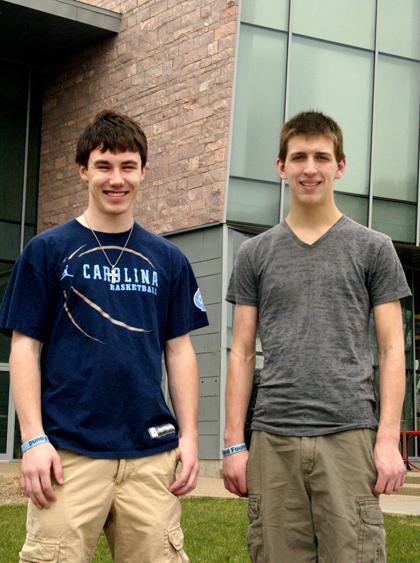 Erik Muckey and DJ Crawley-Smith at the University of South Dakota in 2011.University of South Dakota sophomores Erik Muckey (left) and D.J. Smith helped create the national, non-profit organization “Lost and Found” and its USD chapter. Smith serves as president and Muckey as treasurer for the group, which provides support and awareness about depression and suicide. The two men said they have gained great satisfaction upon learning the organization has saved lives. “Lost and Found” grew out of Smith’s high school presentation on suicide, which won national honors. The organization has grown to 4,000 Facebook friends from across the nation and even Great Britain. (David Lias/Vermillion Plain Talk) 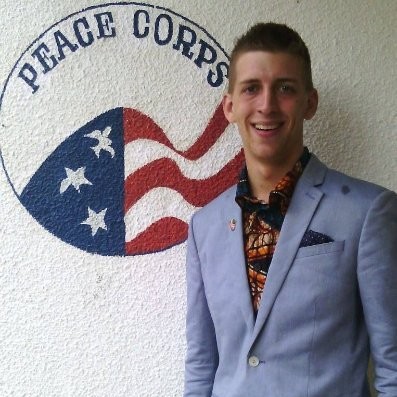 DJ Crawley-Smith served in the Peace Corps for nearly two years, starting in 2015.

His own lived experience with mental health stigma, as well as stigmatization of the LGBTQ+ community during his teenage years, fueled his motivation to help others at a young age.

He gave presentations about this work at state and national FCCLA conferences. On the way home from the 2010 National FCCLA Conference, where the presentation had been well-received, a conversation about what should happen next led to the idea to start a nonprofit dedicated to suicide prevention. Crawley-Smith brought together four trusted friends—Matt Bartl, Brittany Levine, Kristina (Debus) Hill, and Erik Muckey—to form the initial Lost&Found Board of Directors with him in September 2010. All five had recently graduated from Mitchell area high schools and were pursuing college degrees that fall.

Crawley-Smith served as the President of the Board of Directors for the organization’s initial four years (2010-2014). He worked alongside Muckey and a handful of friends and classmates to launch the first Lost&Found chapter at the University of South Dakota in 2011. New chapters were formed at South Dakota State University (2012) and Dakota State University (2013) shortly thereafter. In 2014, he handed over the reins of the nonprofit to Muckey, who has led the organization since.

A video of Lost&Found’s history through the organization’s 10-year anniversary in 2020 includes an interview with Crawley-Smith: “We really wanted to help teens and young adults who were suffering from mental health issues and suicide ideologies, and the greater communities, who are struggling so much to discuss topics that, at that point and time and even still now, are incredibly taboo.”

In addition to Lost&Found, Crawley-Smith made a difference in many other ways. As a student at the University of South Dakota, he was a proud brother of Phi Delta Theta, as well as serving as the Vice President of the Student Government Association (2012-2013) and Executive Director of the South Dakota Student Federation (2013-2014). He was a fierce advocate for students and made significant strides to improve student health on campus, including the passage of a campus smoking ban, new sexual assault policies for the South Dakota Board of Regents, and the creation of multiple mental health student awareness programs through Lost&Found.

After graduating from USD in 2014, he joined Susan Wismer’s South Dakota gubernatorial campaign as a Call-Time Manager. Wismer’s campaign was the first ticket for governor and lieutenant governor in South Dakota history to include two women, with Susy Blake joining Wismer on the ballot for Lieutenant Governor.

After the campaign, Crawley-Smith joined the Peace Corps in 2015, serving in Tanzania for nearly two years until an emerging health condition—later diagnosed as brain cancer—brought him back to the United States.

Upon his return stateside, DJ served briefly as a teacher in the Mitchell School District before completing a Master of Arts degree from the University of Washington’s Henry M. Jackson School of International Studies in 2019. Crawley-Smith then served as a Census Field Supervisor for the US Census Bureau leading into the most recent census (2020). He married his husband, Ben Crawley, on August 6, 2021.

Mourning his death are his husband; his parents, Pat and Veronnica Smith; his siblings, Shea, Emmy, and Andrew; many family members and countless friends.

His work with Lost&Found will live on far beyond his short time on this Earth.

“DJ’s efforts to ‘do more to prevent suicide’ will be one of his greatest legacies, standing ahead of his time and living on for time immemorial,” Muckey said. “We are forever indebted and grateful to DJ for the vision he shared and his courage to pull together friends, family, and community members toward solving one of our country’s greatest challenges.”

Crawley-Smith reflected on this legacy himself in 2020, at the time of Lost&Found’s 10th anniversary: “Ten years ago we were a group of fresh-into-college kids with an idea that we wanted to help people who were like us. We wanted to bring a voice to mental health well-being. Now, Lost&Found is serving communities across the State of South Dakota and only continues to grow. Heck, it even helps me. I recognize that there is a vast spectrum between ‘Lost’ and ‘Found,’ and I don’t think any of us are purely one way or the other. And I think if I am not quite sure where I land, I am probably leaning left of center. But the neat thing about that is I am working on myself. I think it is okay to not always be okay. I also think we should all continue building our abilities to support ourselves and support others.”

Lost&Found is a South Dakota-based 501(c)3 not-for-profit organization that aims to do more to eliminate suicide among young adults in the United States. Lost&Found trains advocates, provides evaluation and research services, and connects fragmented mental health systems with relevant, evidence-based information and tools. Much of the organization’s current work is on college and tech school campuses in South Dakota and Minnesota. Lost&Found’s programs and digital content reached more than 2.3 million people in 2021. Learn more at resilienttoday.org.