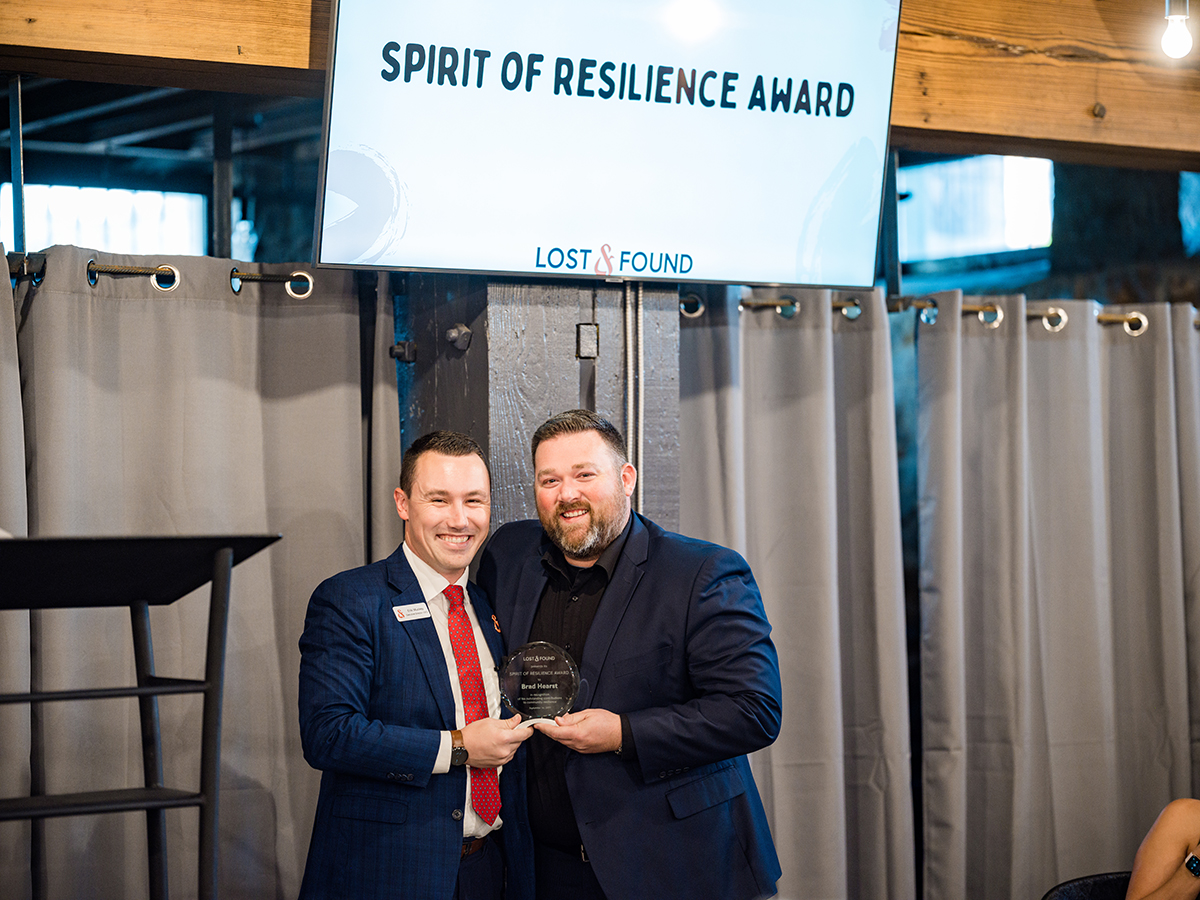 A little over two years ago, Lost&Found presented its first Spirit of Resilience Award, an honor that was created to recognize someone who had shown a commitment to improving resilience in our community. This year, Lost&Found established another award, called the DJ Smith-Crawley Doing More to Prevent Suicide Award to honor someone who, like Lost&Found co-founder Smith-Crawley, works to prevent suicide among college students.

For 2022, Brad Hearst of Sioux Falls, S.D., received the Spirit of Resilience Award, and Jennifer Noteboom of Pickstown, S.D., was given the DJ Smith-Crawley Doing More to Prevent Suicide Award.

The awards were presented at the Make Your Mark event in September. Here is the what Lost&Found’s CEO Erik Muckey said at the event:

As many of you know, this year Lost&Found tragically lost one of its founding members. DJ Smith, a former student at USD and a dear friend of mine, lost his life to brain cancer earlier this year. He was incredibly important in helping to create a vision for Lost&Found 12 years ago and facilitate that vision for several years. He is missed dearly, and we at Lost&Found, along with DJ’s family, have chosen to establish an annual award in his honor.

The DJ Crawley Smith Doing More to Prevent Suicide Award is an honor that will be given to a campus partner and volunteer who has gone above and beyond to help to keep students safe and to promote Lost&Found’s vision of “no more suicide.” 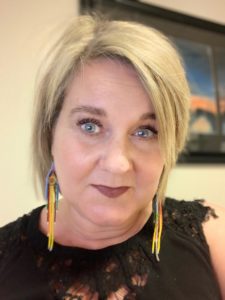 The recipient of the award this year is Jennifer Noteboom, a former campus counselor at Dakota Wesleyan University. Jennifer, who hails from Pickstown, SD, tragically lost her own son to suicide eight years ago while he was a student at South Dakota State University. His tragic death led Jennifer and her family to look at how they could pay support forward to others so they didn’t experience the same tragedy—and found Lost&Found in the process. From the proceeds of Connor’s memorial fund, Jennifer and her family supported the launch of the South Dakota State University Lost&Found chapter. Since that time, Jennifer has been steadfast in her support of Lost&Found. Through her work as a DWU campus counselor, Jennifer helped Lost and Found build a thriving chapter at Dakota Wesleyan University that has reached hundreds of students over the years. Her kindness and tenacity has helped to keep countless students safe. She’s unable to join us this evening but she did send a note that I will read now:

I recently took the Myers Briggs personality test for the first time in 25 years and discovered I had become an INFJ, an advocate. When I first saw what I’d been classified as I thought, “No way- that can’t be right. Advocates do big things that affect large numbers of people, like, oh, I don’t know, starting a nonprofit that has impacted thousands of young adults. The more I sat with it, though, the more I came to realize that doing small things for a long time can also make a difference. Advocates with a capital A, I am in awe of you and your passion and energy will change the world. If you’re a little a advocate like me, remember that you, too, are making a difference, one caring action at a time.  I’m disappointed that I never got the chance to meet DJ- I have the feeling that I would’ve really liked him. I have had the chance to see how much he meant to those of you who knew him and how much of an impact his little project has had on the world. I am incredibly honored to have been chosen as the first recipient of the DJ Smith Crawley Doing More to Prevent Suicide award. I will strive, in my little way, to live up to DJ’s legacy.

I’m extremely honored tonight to present the 2022 Spirit of Resilience Award to Brad Hearst. I consider Brad a friend and a mentor, and I couldn’t be more pleased to present him with his award. After Brad lost his brother to suicide several years ago, he started an organization to help people who were going through a similar loss. Brad founded Survivors Joining 4 Hope with the goal of alleviating the stress finances can have on families that are going through the most difficult time in their lives. Instead of worrying about funeral costs, families could spend time grieving.Over the years, Brad has created impenetrable ties with dozens of families who have lost loved ones. He has spent thousands of hours meeting with families, counseling them, and supporting them through their grief. He remains in contact with many of these families to this day. This impact on our community is immeasurable, and we’re so lucky to have his generous spirit working on this important issue. Brad, thank you for everything you’ve done for me and for our community. Please join me in honoring Brad Hearst as our 2022 Spirit of Resilience award winner.

Brad shared this message on Facebook following the event:

On Friday I had the privilege of being presented with the Spirit of Resilience Award by Lost&Found. I am usually an individual who enjoys public speaking but in the moment I got choked up as my good friend Erik presented me the award. It is truly an honor to be recognized for my contributions to community resilience. After my brothers passing I felt confused and lost. Helping individuals through their own grief has helped me address my own grief with his passing. So I really need to thank all the families that have trusted in myself, Survivors Joining For Hope, our board and our volunteers! Please spread the word that organizations like L&F are here to make a difference in the mental health space and support both suicide prevention and postvention care. If you have time please check out their website at resilienttoday.org and share their info with a friend! #Honored #ThankYou #ResilientToday 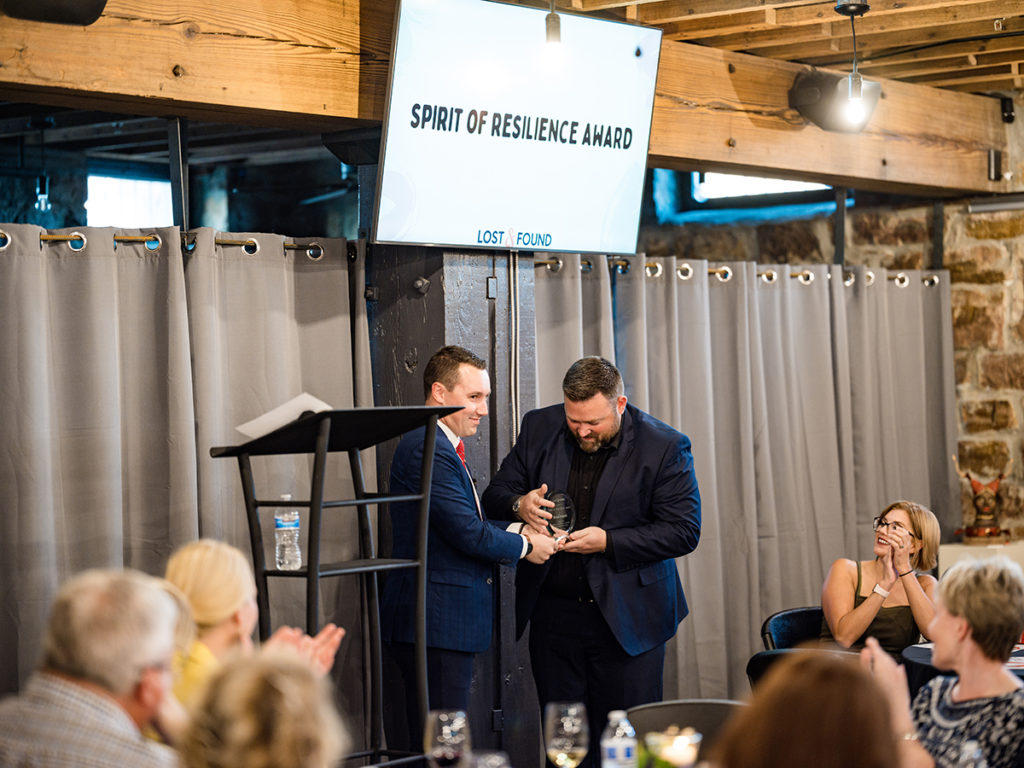