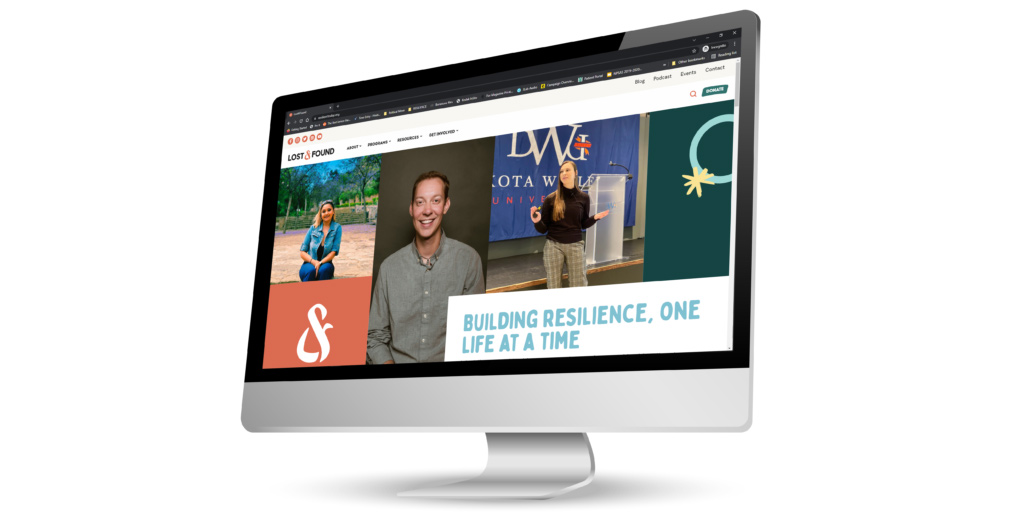 Lost&Found is launching a newly revamped website that reflects the many changes that the organization has had in the past two years.

The address, resilienttoday.org, is the same, but beyond that, most of the content has been updated or newly written. It also reflects new branding, including a new ampersand logo, that was implemented in August 2021.

The biggest changes are the sections describing Lost&Found’s programs. The organization started in 2010 as a student-led nonprofit mostly doing its work through student chapters on college campuses in South Dakota. While many of those chapters are still active, in the past two years, Lost&Found has also adopted other ways to pursue its vision of ending suicide for young adults. Lost&Found now works in three distinct program areas: Student Programs, Research & Evaluation Services, and Education & Advocacy. Each of these program areas includes exciting new programs, such is the Peer2Peer Mentorship program, bringing together students who need a little help with other students who can help to provide it, and the Campus Resilience Index, which assesses the suicide prevention capacity of college and technical school campuses and their communities.

Just a few years ago, these programs were still in the “dream” stages. Now they are being implemented and helping young adults in South Dakota.

As the organization’s work has grown, so has its staff, and that change is reflected on the staff page. Lost&Found now employs 13 resilience-minded individuals, plus one open position.

The organization’s Resources page has also been updated with links to relevant content and services. A new section on the website outlines six ways that supporters can get involved with Lost&Found’s work.

“This beautiful redesigned website showcases the breadth of truly innovative, meaningful work being done by Lost&Found’s staff,” said Heidi Marttila-Losure, Lost&Found’s Director of Communications. “We hope that it helps people understand this work, as well as how they can be a part of Lost&Found’s suicide prevention efforts. We’ve come a long way in just a few years, and there’s potential to accelerate even more with broader support. We invite people to explore the site, learn more, and get involved.”

The website redesign was implemented by McQuillen Creative Group in Aberdeen, S.D.